Getting “Brave” … An All-New Adventures by Disney Destination

Audiences everywhere have fallen in love with bagpipes, tartan, and everything Celtic thanks to Disney·Pixar’s “Brave,” but imagine setting out on your own fantastical adventure across the Scottish Highlands? Now you can follow your dreams (and a will-o’-the-wisp or two!) to the country that inspired the film with a “Brave” trip to a new Adventures by Disney destination – Scotland.

Beginning in March 2013, Adventures by Disney will offer expertly planned, group-guided vacations that enable globetrotters to follow in the footsteps of Disney·Pixar filmmakers – from Edinburgh to Inverness. For nine days and eight nights, you’ll experience Scotland’s culture, medieval castles, and lush, green landscapes.

Just like the fiery, fearless Merida, you’ll step inside the circle of standing stones at Callanish, horseback ride over heather moorlands, canoe across the mysterious Loch Ness, try Ceilidh dancing (pronounced “kay-lee”), and explore Urquhart Castle, the fortress (built upon an ancient burial cairn) that was captured numerous times by power-mongers vying for the Scottish throne. And though a visit to the village witch doesn’t top the itinerary, there are plenty of magical stops along the way.

Some additional trip highlights include:

● The Royal Palace of Holyroodhouse, the Queen’s official residence in Edinburgh
● The National Museum of Scotland, home of the iconic, 12th-century Lewis Chessmen that Merida and Queen Elinore played with in the film
● Dovecot Studios, for a demonstration of the ancient art of tapestry weaving (like those decorating the castle walls in “Brave”)
● Coach rides to the magnificent Isle of Skye, Glen Coe Valley, Quiraing, Brothers Point, Kilt Rock, and the Sound of Raasay, where rock formations crown mist-blanketed hilltops
● Tour of Eilean Donan Castle, a centuries-old palace at the crossroads of three lochs (translation: lakes!)
● Isle of Lewis, dotted with the scenic beaches and ancient sites
● Blackhouse of Arnol, a peat-roof dwelling where locals lived with their domesticated animals
● Gearrannan Village, a village of traditional thatched “blackhouses” that provided inspiration for the Witch House in “Brave”
● Dun Carloway Broch, an ancient stone structure from the Iron Age
● Rothiemurchus Estate, one of the greatest woodland forests in Britain and home to the 13th-century Loch an Eilein Castle
● Dunnottar Castle, perched high above the sea, was one of the sources that inspired Pixar artists when creating Merida’s castle
● Archery lessons at Glamis Castle, the domicile that sparked Shakespeare’s “Macbeth”
● Private tour of Edinburgh Castle, home of the Stone of Destiny and Scottish Crown Jewels
● Inverness, the ancient capital once inhabited by Pictish Kings 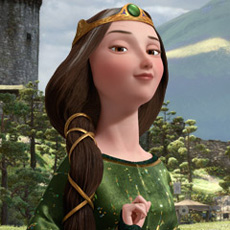 Want a wee bit more fun before setting sail across the pond? Follow the mythical trail to Disney Parks and meet Merida! The flame-haired heroine appears as part of an immersive Disney Character experience that helps bring the Scottish legend to life.

Located in the Fantasyland® Area (Disneyland Park) as well as the Magic Kingdom® Park’s Fairytale Garden (Walt Disney World® Resort), Merida’s “play and greet” experience – inspired by the film’s Highland Games sequence – is set amongst tapestries that tell the tale of the headstrong teen’s quest to alter her destiny. As music from the film fills the air, kids of all ages can learn how to shoot bows and arrows with an archery lesson, participate in coloring activities, or chat about clans ‘n’ kingdoms with Merida herself – and keep your eyes peeled for three furry little friends from the movie! (Don’t forget cameras and autograph books to add even more memories to your personal family lore.)

Of course, if you haven’t already seen Disney·Pixar’s “Brave,” then break out your kilt and head to theaters … it’s the perfect prequel to an Adventures by Disney Scottish holiday!